My little buddy went home yesterday, boy is my house quiet.  I miss giggles, babbling with words dispersed here and there.  It was a fun week.  It had all turns of Motherhood that I had forgotten about.  We rocked, had naps, got in and out of the car seat a million times.  We went to the store where he refused to sit in the cart and I had to hold him and push the cart around.  And he got sick, yes he threw up all over the front of me and when I held him up on my shoulder he threw up all down the back of me.  Yikes, I had forgotten about that.  I am slurped on, sneezed on, and drooled on everyday I work, but a full blown throw up has not happened in a long, long time.  My buddy had a bad ear infection, which I had suspected but was confirmed on a visit to his Doctor.  We spent two days rocking in a chair with him sleeping in my arms.  Nothing else got done, boy you forget about those times, too.  I miss holding his little body, even though after being ill you would have thought I would have had enough of that.  Yesterday morning before he left I shot the following pictures.  He woke up feeling better, not perfect but better.  Enjoy. 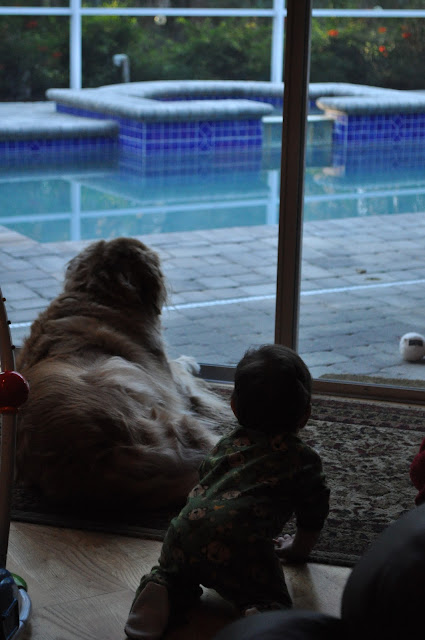 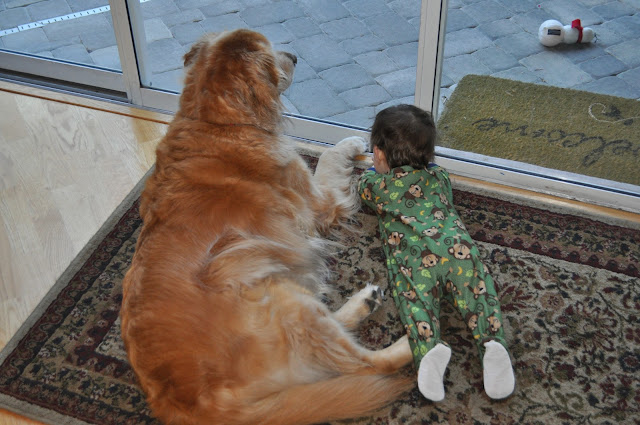 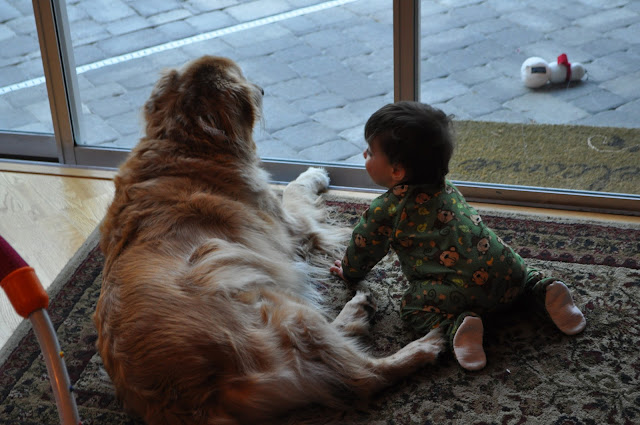 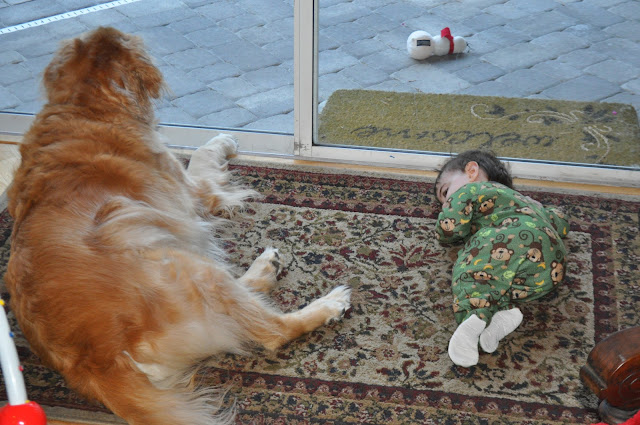 Happy Sunday.
Posted by Mereknits at 8:49 AM

Awww that is the most adorable picture. Now Max has a new sweet little friend to help him keep up with the pool. So adorable.

Sorry to see him go for you, but I am glad you had a week of bliss to enjoy him. He's such a blessed little fellow to have someone as loving as you in his life.

Kids and dogs; a little bit of heaven on earth.

what precious photos-thanks for sharing with us

How sweet! It looks like Max has really enjoyed his company!
You are a blessing to help out his family! A true sweetheart!
Hugs, Shari!

Oh my gosh, such sweet pictures. I'd say that little boy has a real soft spot for Max.

Hope you have a good week.

You, dear MEre, are a Saint. HOw wonderful that the parents got a great break. How lovely of you to tend to him even sick.

That last one is so sweet! Well, it's Super Bowl Sunday in your home - that means football is the order of the day.

Oh, how we do forget those moments of sick babies but then it comes back quickly. I love a warm baby to cuddle and all that goes with it. You were a good mommy! Also nothing like a baby and a dog. Your buddy really wanted Max's attention and I can see that Max was trying hard to oblige. Max is a good boy! Hope you get to have a nice Sunday and do whatever you WANT!
xoRobin❤

Hope he is feeling much better soon.

What beautiful photos, babies and animals are such an adorable mix :) Have a lovely Sunday xx

Oh my...how did I miss so many posts??? I bet you are exhausted!!! How lucky for him to have such a wonderful care taker when his foster parents are away. I could never be involved in foster care. I would want to adopt every single child in need, I fear!! It would just break my heart!!
But hooray for you! And whomever can do this, as there is such a need! He is darling, and I love the photos of him with his furry friend!!! Now go rest!
Hugs,
Kris
Kris

Hi Meredith,
Tonight I read your blog with my Little Man and he has seen the photos too. He liked Max so much and wants a dog like him!
Have a lovely Sunday. Hugs.Gaia.

Such an adorable picture!!

Thank you for sharing such sweet pictures. It is amazing the things we miss isn't it?
Blessings,
Betsy

Awww... you are such an angel. And Max was being so good. Those photos of the two of them are just precious. Sweetness. ((hugs)), Teresa :-)

Hi Meredith,
Tammy has introduced us and I thought I'd drop by to say hi! ... You've had a busy time ... and he's such a sweet little babe in his monkey pajamas! If only more humans were lucky enough to have Max's 'sixth sense' and patience - and of course, your care - what a wonderful world we would live in. We live across the road from a row of homes which provide respite care and are in awe of the bravery and determination of both the patients and their carers. I take my hat off to you. Here's hoping you have a great week and can find some time to re-charge your own batteries ! Have a sunshine happy day,
Regards, Tiffane

Oh Lord! You really ARE an angel.,,that would have been more than I could handle!

Aw poor little lamb being so poorly, and poor you being sicked over. It happened to me years ago when my eldest was about 2 on a bus. Nowhere to hide...
Adorable photos and Max is being so patient with your little buddy.
Thanks for your lovely comments on my blog, x

Those pictures you took are really sweet. Hope you can rest up and didn't catch anything from him. I've had a busy weekend, but I did manage to finish another crochet project while watching the Super Bowl. Will post tomorrow.

What a gift you are to each other. Aside from the throwing up part and the million times in and out of the car seat -- I envy you. Haven't rocked a baby in soooo long.

He and Max are so sweet together.

Great pictures Meredith and you are such a sweet heart to take care of him....I bet you will miss him. Have a great week and enjoy sleeping in a little now.

I have missed out on big vomits so far with my son...I dare say I will catch up on that "pleasure" at some point, heh! Inevitable with kids, isn't it.

HI MEREDITH.
YOUR HEART IS FULL OF WARMTH AND LOVE
THAT LITTLE BOY IS SO LUCKY TO HAVE YOU IN HIS LIFE....THERE IS NOTHING LIKE HAVING TO HOLD AND LOVE A BABY....
HAVE A WONDERFUL WEEK......RIZZI

Dear Meredith, being an adoptive mom myself, that story really got to me. Bless your heart for taking care of this little guy. I can smell his sweet hair after a bath now as I think of how great that is. The pictures w/your Max are wonderful.

Precious! Thanks for sharing the adventure with us, Meredith.
xx,
Gracie

Those are the sweetest photos ... what a cuddly-looking little guy, and what a nice furry-looking big guy.

Hope the little one is feeling better soon. And I hope Max doesn't miss him too much!

I'm so glad that Max and your sweet young friend are both on the mend, and that your Dad is getting better too. My goodness, life has come at you fast lately!

Your felted heart jewelry is very pretty. You have a wonderful eye for such things.

Aaawwwww! such a lovely finish picture, bet you miss him a lot.
hugs x 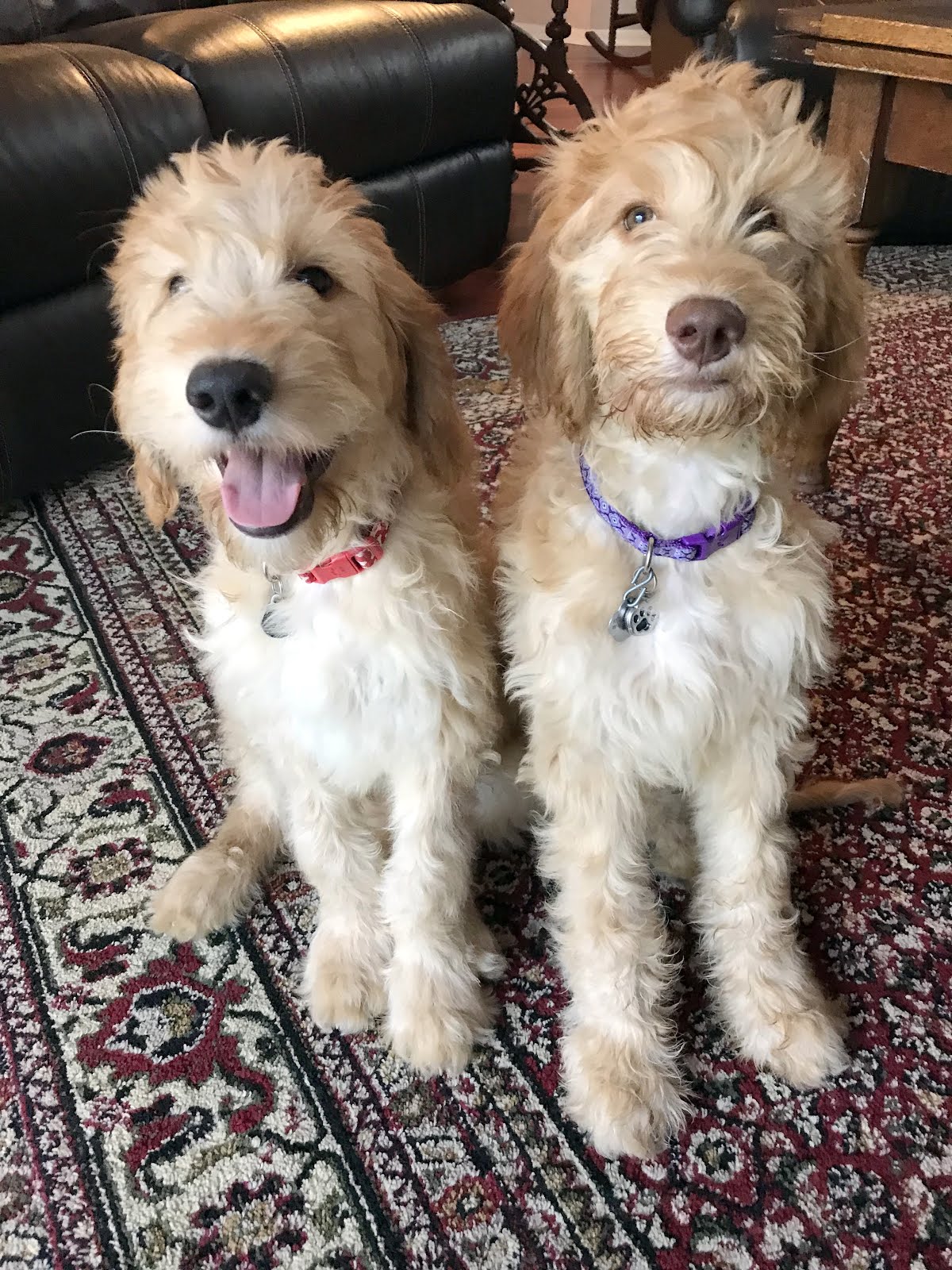